In fir forest I didn't meet any birds exclude Hume's Warblers. Once I heard the Nutcracker's voice and once saw how Wren romped in high grass. That's all. All other birds were Hume's Warblers. There were not so much birds near Batareika river but number of species some more. The flock of Grey-headed Goldfinches flew out about me. Same Hume's Warblers from time to time jumped from bush to another. Probably Hume's Warblers' nesting time began again. Because these birds sang activity and flew by the pairs. Twice saw juvenile White-bellied Dippers. One bird crying flew out about be over the river bed. Backward another one sat on the stone very cool. By the way this young Dipper didn't cry even flight from one stone to another. Many Grey Wagtails. Grey Wagtails always searched food between stones near the river. Sometimes birds came very close on two-three meters. But never birds went beside me. Often birds closed to me but birds prefer to cover “dangerous” part of the path by flight. It [...... read more ]

On early morning July 22 before sunrise Rosefinches began to sing and Merlin began to cry. Merlin both two days occurs near the lake. And on early morning Merlin flew above the lake like a swallow, pirouetted and hunted to insects. Some further I walked on fir forest. Met several Coal Tits, Nutcrackers, Oriental Turtle Doves, Blackbirds, Mistle Thrushes and one Black-throated Accentor. All birds were very scary. I couldn't close to any bird. Once heard woodpecker's ruffle. Sound was far some time I went to sound but when knocks were very close sound stopped and didn't restore. I even didn't see woodpecker. Further found stub with drawed fir cones but it may be either woodpecker's or Nutcracker's dining room. Under the fir forest in gardens saw Grey Wagtails and covey of Common Pheasant with hen. Pheasant's chickens are very little but yet could fly. But their flying is so short about 2-3 meters. And they mainly prefer to hide and to run on grass thicket than to fly. [...... read more ]

Very rainy day, sun wasn't showed, it was rainy incessant. The lake is placed in high mountain chine in fir forest belt. Landscape is mostly close fir tree forest crossing by wide juniper glades and wet meadows. Because of rainy weather I didn't see a lot of birds mostly heard ones. From time to time in fir forest Carrion Crows, Spotted Nutcrackers, Oriental Turtle Doves occurs. At night Scops Owl sang, Hume's Warblers and Rosefinches sang by day. On wet meadows birds fared. Someone hunted to insects another one pecked seed. No one reside at meadow constantly, birds arrived and flew away. Common Whitethroats, Common Rosefinches (these two species made majority of spotted birds), on evening flocks of Grey-headed Goldfinches and one Stonechat arrived. Once Corncrake shot out the road. [...... read more ]

Murky and rainy weather. In spite of a rain Hume's Warblers much sing. If sit under the fir tree that can see how Warblers fly from tree to another one. Except Hume's Warblers (really most numerous birds on Tien Shan fir forest) saw also Common Rosefinches, Mistle Thrushes, one male Blackbird, one White-bellied Dipper, one Common Treecreeper. [...... read more ]

On summer midday sometimes seems that there are no birds all around. Silence, no songs, nobody budges. But if to sit on quiet place and to see around that will see birds. Today it was so. On beginning I spied Rollers. Pair of Rollers played on air. Further I spied budges on rocks. On binocular saw Common Kestrel eating something. Also on binocular saw two Rock Buntings. Buntings even sang. If there was no wind I necessarily would record songs of Rock Buntings. Its noticeably differs from songs of other buntings I heard. On rocks saw Chukar Partridge's family, two adults and several juveniles. On lowland a lot of common birds such as Rollers, Bee-eaters, Lesser Grey Shrikes, Mynahs. Mynahs on country side fed like on them common habitat. Flocks of Mynahs escort cattle and peck large insects from back of cattle. Rock Pigeons sat near burrows. Birds as wild but only several birds have “wild coloring” other ones have white, black and spotted color. Yet one news. Rosy Pastors began to attack [...... read more ]

Today on dinner time I have gone to same chine over “Prosveschenets” sanatorium. Saw all same birds. A lot of Hume's Warblers, one White-bellied Dipper. Saw Blue Whistling Thrush on artificial watercourse. Bird was very good lighted (showed all blue colours) but didn't wait when I make photos. Today I went from main chine to branch one and saw several Mistle Thrushes and several Common Rosefinches include bright red males. [...... read more ]

In the chine above former sanatorium Prosveschenets there are a lot of Hume's Warblers. These birds cheep on each fir tree on each high bush. It is possible to see Warblers but not to photograph. Because Warblers sing either in deep crowns or in high fir trees. Twice White-bellies Dippers flew along the river, one of them was grey colored juvenile bird. Once saw Common Rosefinch. Bird was not bright male but spotted brownish juvenile bird. Also saw one Blue Whistling Thrush. I sat after the bush and think that bird didn't spot me. Thrush from time to time jumped under the stub as if there was nest. I tried to search nest but didn't find it. In any case the meeting of Blue Whistling Thrush is always nice. All the more I thought that I will not meet Blue Whistling Thrush in this chine because the building began in this place. [...... read more ]

The weather is murky and windy. There are many little lakes in Ile region. There are always some birds on these lakes. Today I could to visit two lakes. On first lake met adult Great Crested Grebes with juvenile birds. Also saw a lot of Rollers' burrows. But Rollers are scary birds. Try to make photos of Rollers near the burrows unsuccessful ended. I waited birds near the nest but didn't wait. Birds flew to burrows but having seen me crying changed course of fly and departed back. Strong wind casted out birds from russian olives and salttrees. Saw only several Tree Sparrows. Once saw flying Little Bittern. A lot of Rooks (mostly juveniles) and several Jackdaws clustered near the pools and drank the water. On roadside elm thickets met only one Shikra and several flocks of Turkestan Tits. Mynahs and Rosy Pastors were in evidence. On second lake number of birds were some more. Clamorous Reed Warblers were audible. Again saw Crested Grebes, Coots with juveniles. From time to time Little Bitterns [...... read more ]

The first photo-record in Krasnoyarsk Kray.

Rare migratory and wintering visitor. Just over ten observations are known in Ukraine. 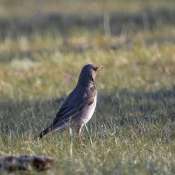