The first reliable record of the Great Black-backed Gull on the territory of Kazakhstan. There are indications of finds of this gull in the Caspian Sea between the mouths of the Volga and the Urals, as well as near Omsk (Dolgushin 1962). Vagrant are known to the Makhachkala region (Tatarinkova 1970).

A rare vagrant species for Kazakhstan. On February 27 and 28, two birds kept in the thickets of silverberries near the village of Uzynagash (43 km west of Almaty). This is the sixth record of the Dusky Thrush for Kazakhstan. Records of this species are known for the Syrdarya, near the village of Dzhulek (October 16, 1927), near Almaty (February 16, 2013), as well as Ust-Kamenogorsk (October 14 and 16, 2016), Kurgaldzhino (May 7, 2020).

First observation of this species in Uzbekistan 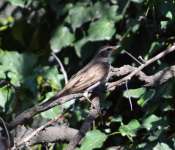 First observation of this species in Uzbekistan
more rarities...