The Checklist of the Birds of Northern Eurasia

The second record of the Amur (White) Wagtail on the territory of Kazakhstan. Was first record on May 21, 2018 in the village Kanshengel, Almaty region (Sveta Ashby, birds.kz).

Potentially the first record in Kyrgyzstan, at least according to Evgeny A. Koblik and Vladimir Yu. Arkhipov, Avifauna of the States of Northern Eurasia (former USSR), Checklists.

Potentially the first record of a Pallas warbler in Kyrgyzstan.

First record of a yellow-browed bunting in Kyrgyzstan.

The westernmost photo-record of the species in the West Siberia. 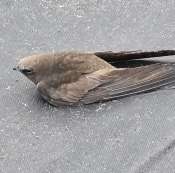 Rare migratory and wintering species. The second observation this year: on February 13, one bird was photographed by Serhiy Lyubchenko in Kyiv on Lake Telbin, 17.02 P. Panchenko noted in the top of the Sukhyi estuary also one individual (not yet published).

A rare vagrant species. It was last observed in 2016 during the invasion of northern Europe. The 7th confirmed registration in Ukraine and the First in Odesa region.

A rare vagrant species. It is periodically observed during spring migration, mostly near the coast.
more rarities...