In the second part of July, in the conditions of coronavirus pandemic, I was travelling to the south of Russia, to Krasnodar kray. Despite the fact that birdwatching wasn't planned, I took a binocular and camera with me. I found little lifers, there wasn't a lot, but they were rather interesting for me. The first part of the trip, I spent in Black sea coast. Once I went to Yew&Boxwood trees grove and some times visited Mzymta river mouth finding birds. Then, I spent two days in mountains near Krasnaya Polyana and Esto-sadok. As I haven't been to mountains after I had begun doing birdwatching, more interesting species of birds were there in the mountains. And more lifer birds.P. S. Not all photos are put in chronological sequence. P. P. S. I couldn't take photo of caucasian subspecies of mountain chiffchaff. Heard only the voice. [...... read more ]

For few last days I could watch ducklings of three species of ducks. As usually, the guide was female, mom, and the ducklings followed her.Mallard and ruddy shelduck ducklings were watched on 2020-06-13 in Terletsky park (Moscow). These species are usual in Moscow, so, it's likely that the ducks had nests on those ponds and in their environments.In Lotoshino fish farm (Moscow area, Lotoshino distr.) I watched common goldeneye ducklings on 2020-06-06. The ducklings were sailing and even tried to dive. But experienced mom took them to the center of the pond. It's likely that the goldeneyes had nest infish farm environments. [...... read more ]

Travel to Kazakhstan in May

Hello? dear friends! We're going to visit Almaty in Kazakhstan in the beginning of May. Of course? we don't have much time? about 3 or 4 days, but it's better? than nothing. Unfortunately? I can't ask anybody about this? and because of I ask here. Thus? the question is:Which trips can we do near Almaty? desirably not farther, than 200 kms? in order to species were more interesting?Thanks in advance!P.S. I really want to watch paradise flycatcher? so? could I find it near Almaty? or I should better go to Taraz and Shymkent, [...... read more ]

It's well-known, that when there are a lot of berries in winter, thrushes can be wintering in these places. The most of them is fieldfares (Turdus pilaris), but in smaller numbers another species can be wintering. Annually in one of parks in Moscow eurasian blackbirds (Turdus merula) are watched, and this year they're going to winter in number of 2 till 5 males. But the most unusual winterer is redwing (Turdus iliacus). I haven't found anything about redwing wintering in the Internet, but Anna Golubeva sais that she had taken photos of redwing in winter 2013. In 2020 one bird was watched twice in one plce, with an interval of 1 week (01.12 and 01.19). [...... read more ] 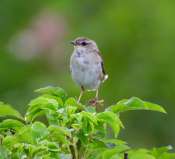